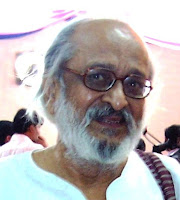 Dr. H(ariharan) Srinivasan (born 1929) is an Indian orthopaedic surgeon who spent most of his working life in correcting the deformed hands and feet of leprosy-affected persons. During his active period he was highly regarded for his academic and research work in the management and prevention of deformities and disabilities in persons with insensitive and paralysed hands and feet in general and the leprosy-affected in particular. He retired from active work in 2008.

Dr.Srinivasan was born on September 7, 1929 (on the Ganesh Chaturthi day) at Vellore, South India, He was the grandson of S. Venkatarama Iyer (1871-1932) of Pilluvalasai (a village in Aranthangi taluk in Puthukottai district), who started his life as a lowly taluk office clerk with a monthly salary of about 12 rupees and rose to the position of Deputy Collector in the provincial administrative service, the highest position that a ‘native’ could reach in those days. Srinivasan’s father was Dr V Hariharan the eldest son of Venkatrama Iyer. He was a popular medical practitioner who practised at Arni, a small town near Vellore, famous for its handloom silk saris. Dr. Hariharan was well-known locally as he was the only practitioner of modern medicine for many years for many miles around, and also because of his activism in the nationalist politics of the time, as member of the Indian National Congress, for which he was imprisoned by the British Government for one year during 1932-’33. Srinivasan’s mother was Janaki, second daughter of K. Krishna Iyer of Vellore, a Tamil shorthand reporter of sub-inspector rank and a highly respected Tamil and Saiva Siddhanta scholar who had a personal library of over 10 000 Tamil books. Dr Hariharan and Janaki had eight children, six sons and two daughters, of whom Srinivasan was the eldest.

Dr.Srinivasan had his Elementary and Middle School education at Vellore and completed his High School in the District Board High School at Arni. He was considered as an “above average” student, particularly in Tamil and science, throughout his school career. He completed SSLC in 1943, at the age of thirteen and a half and had to wait for a year to join the intermediate course in science, at Madras Christian College, Tambaram. Here Dr.Srinivasan got his first academic award "Chinnaswami Pillai Prize” for Proficiency in Tamil. He joined the Madras Medical College for his basic Medical Course and took his MBBS degree in 1952. He was a rank student throughout and got "Bradfield Memorial Prize" for combined proficiency in Anatomy and Surgery from the Madras University in 1952.

Dr.Srinivasan worked in Christian Medical College, Vellore during 1953-54 as tutor of Anatomy, mainly to learn Anatomy for the primary FRCS exams and also to save some money for his initial expenditure in UK.

Dr.Srinivasan proceeded to England in 1954 for further studies and to take his fellowship in Surgery from the Royal College of Surgeons, London. He got his FRCS (Edinburgh) in 1957 and FRCS (England) in1958. He was in UK from 1954 to 1958 and worked in Hospitals in Birmingham, North Wales and London in different capacities such as House Surgeon, Senior House Surgeon, Registrar and Locum Consultant. During his stay in London he met Dr.M.N.Padma, a Pediatrician from Mysore, doing her post graduation in child health and they got married in 1957 in London. She was the youngest sister of Prof. M.N.Srinivas, one of the most distinguished Sociologists of India.

On his return to India in 1959, Dr.Srinivasan joined Kasturba Medical College, Mangalore as Reader in Orthopedic Surgery and worked as Hon. Surgeon (Orthopedic Surgery) in Government Wenlock Hospital, Mangalore, Karnataka.
He started operating on some leprosy patients while working there and got interested in the problem of deformities in leprosy. This combined with his interest in hand surgery and clinical research plus some idealism made him join as full-time orthopaedic surgeon in Central Leprosy Teaching and Research Institute (CLT&RI) at Chingleput, near Madras (now Chennai) , in 1962. He spent the next twenty-two years there establishing and developing a highly reputed surgical department. It was here that Dr.Srinivasan carried out his research on various aspects of deformities occurring in leprosy patients and developed reconstructive surgical techniques and made a name as distinguished scientist in this field. Some of the surgical procedures introduced by him for the correction of these deformities are widely used in India and many Countries abroad.
He served CLT&RI, Chingleput for 22 years from 1962 to 1984 in various capacities such as Orthopedic Surgeon / Senior Orthopedic Surgeon / Deputy Director (Surgery) and Director-in-charge of the Institute.
After retirement from CLT&RI, He worked as Research Consultant, Portland Hand Surgery & Rehabilitation Centre, Portland (OR), USA for about two and a half years, from 1984 -1986, organizing a comprehensive research program on carpal tunnel syndrome.

Dr. Srinivasan joined in 1987 as Director, Central JALMA Institute for Leprosy (ICMR), Agra, India (1987-1990). During his tenure he opened up the Institute for PhD students and actively promoted academic interaction between the scientists of JALMA and those abroad. His dedication and sincerity has been a source of inspiration to many research scientists in that institution.

Dr.Srinivasan is a staunch believer in free transfer of his knowledge and skills to other Surgeons to reach the benefits to Leprosy patients all over the Country and World. For him “.The goal of science is to add to knowledge, that is to improve our understanding of some aspect of the world around us and for that purpose, like money, knowledge must also be spread”. He has conducted a number of hands-on surgical workshops sponsored by the World Health Organization, on “Reconstructive Surgery in Leprosy” for Professors and Readers of Orthopedic / Plastic surgery from medical colleges in India, training in all about 100 surgeons.

Dr Srinivasan was selected to take over the Editorship of “Indian Journal of Leprosy” from Dr Dharmendra, the doyen among Indian leprologists, in 1990 and he continued to edit that journal for the next 12 years, till June 2001. He has been a member of the Panel of experts in Leprosy of the World Health Organization (WHO) since 1985 and was invited by the WHO to be a member of its Sixth Expert Committee Meeting in 1987 and the Seventh Expert Committee Meeting in 1997

He has presented papers / participated and chaired sessions in National and International conferences / seminars on subjects related to Leprosy and Hand Surgery. He was invited to give lectures in countries outside India as well, like Brazil, Ethiopia, South Africa and Myanmar. He has published more than 90 papers in Indian and foreign Medical Journals.

Dr Srinivasan has authored Three Books, two commissioned and the third sponsored by the WHO, which are considered bench-mark reference material for leprosy workers. He has also contributed chapters in over ten text books of Leprosy, General surgery, Dermatology, Hand Surgery and Orthopedic Surgery. His talent as artist has been used in illustrating the books authored / co-authored by him, and also extensively used in some other medical text books. He has been President of the Indian Association of Leprologists, a founder member and President of the Indian Society for surgery of the Hand.

Dr. Srinivasan is a voracious reader. His interests are varied and include, History (South India), history of science, especially of medicine, evolutionary biology, mind and brain, cosmology, materialist philosophy, application of philosophy and ethics in science and medicine, graphic arts and Carnatic music.

Tamil Literature has always been his passion. As mentioned earlier, his maternal grandfather, K. Krishna Iyer of Vellore, was a highly respected Tamil scholar and an acknowledged exponent of Saiva Sidhdhantha Philosophy. So also was his uncle Prof. Krishna Sivaraman who served as Professor of Saiva Sidhdhantha in Banaras Hindu University initially and MacMaster University, Canada, later. Dr. Srinivasan himself is a writer in Tamil and has written Novellas, Short stories and Poetry (in vers libre), which were published in Tamil literary magazines and some of them have been included in Anthologies of Tamil short stories (in Tamil, Hindi & English). One of his short stories was selected as “Best short story of the year” in 1971 by a Tamil Literary Forum. A collection of his short stories have been brought out in book form. In the Tamil literary field he is known by his pseudonym “Charvakan”.

Dr. Srinivasan has received numerous awards and honours during his career, including “Padma Shri” award from President of India (1984). He was honoured by the Indian Council of Medical Research with the “JALMA Trust Fund Oration Award” (1979) and the Indian Orthopaedic Association conferred on him the Honorary Fellowship of the Association in 2003. He received the “International Gandhi Award” in 2004 and was conferred “Doctor of Science (Honoris Causa)” by The Medical University of Tamil Nadu also in 2004. The International Federation of Societies for Surgery of the Hand honoured Dr. Srinivasan with the award of “Pioneer of Hand Surgery” in 2007.

On retirement from Agra in 1990, Dr. Srinivasan moved to Chennai. He has two daughters, the elder daughter, Dr. S. Lata, is a foetal pathologist and wife of Dr.Murlidhar Rajagopalan, a dermatologist at Chennai; and the younger daughter Dr. Bharati Srinivasan is a special educator with special interest in autism and wife of Dr. Harpreet Kwatra, an IT engineer in Bangalore. After his wife passed away in 2006, Dr Srinivasan was leading a quiet life sharing his time with his family at Chennai and Bangalore.

Awards, Honours and other Distinctions:

1975 Best Junior Speaker Medal of ISSH at its Annual Conference at Kolkata.

1999 Resource person (invited), along with Dr.Paul Brand, Workshop on
“Paralytic hand” Hong Kong Society for Surgery of the Hand.

2003 Nominated as Honorary Fellow of Indian Orthopaedic Association, at its
Annual Conference, at Ahmadabad.

2003 Delivered “Prof. R. Venkataswami Oration” at the 27th Annual Conference
Of The Indian Society for Surgery of the Hand, at Bangalore.
https://tspace.library.utoronto.ca/bitstream/1807/2693/1/pl04002.pdf

2005 State-of-the-Art Lecturer, on Prevention of Disability, at the First African
Leprosy Congress (January 31 – February 3, 2005) at Johannesburg
Republic of South Africa.

2007 “Pioneer of Hand Surgery”, by the International Federation of Societies for
Surgery of the Hand, at 10th Congress of IFSSH at Sydney, Australia. On
March,11, 2007.

Books authored by Dr.H.Srinivasan and published by World Health Organization, Geneva:
Prevention of Disabilities in patients with Leprosy : A Practical Guide.

Contributed chapters by Dr. H.Srinivasan in the following books and a few others.
1. Mahadevan’s Textbook of Surgery

Brahmanyan
An Octogenarian who believes in Love towards every living thing in the border-less world.